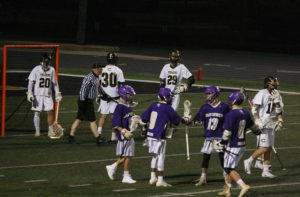 The JV and varsity girls are on the road this evening to play Campbell in an area game.  The varsity girls are going into tonight’s game with 1 win, and 0 losses to Campbell’s 1 win and 2 losses in area standings. The junior varsity and varsity boys teams take on Decatur at home tonight in non regional play.

On Saturday, March 24th both the junior varsity girls and boys teams will take on Northgate and Newnan in the 2018 Coweta Cup JV Tournament.  This year’s tournament is being hosted by Northgate High School. The JV Girls play at 9:00 and 10:00. The JV Boys play at 1:30 and 3:00. Go Indians!

Looking back at last week, the varsity and JV girls started the week out with wins. Monday, March 12th, in a non regional home game, the varsity girls upended North Cobb 18 to 6.  The junior varsity girls added another victory to their season when they defeated Pebblebrook 13 to 1.

Carrollton took a cue from the Monday night’s cold temperatures to put both the junior varsity and varsity boys on ice in what seemed to be a grudge match from EC’s preseason win over Carrollton. In the non regional game, EC’s varsity boys fell to Carrollton 5 to 8; the JV, 4 to 7.

On Wednesday, the varsity boys faced off against North Atlanta at home in their third regional game of the season. Madison Duffessy lead the team in defeating North Atlanta 13 to 11 with 4 goals, 2 assists, and 7 ground balls. The remaining  9 of the 13 goals were scored by  Bailey Brogan with 3 goals, 1 ground ball; Jackson Elliott with 3 goals and an assist; Christian Barnes, with 2 goals, 1 assist, and 5 ground balls; and Nick Daliet with 1 goal and a ground ball. Other notable mentions of the night were  Goalie, Devin McCarragher, with 10 saves; Tanner Schmieder, Owen DeBole, Gareth Ronfeldt, Chase Swilley, and Wesley Chambless each scooping up a ground ball, and Kalope Wingo with an assist and 3 ground balls. 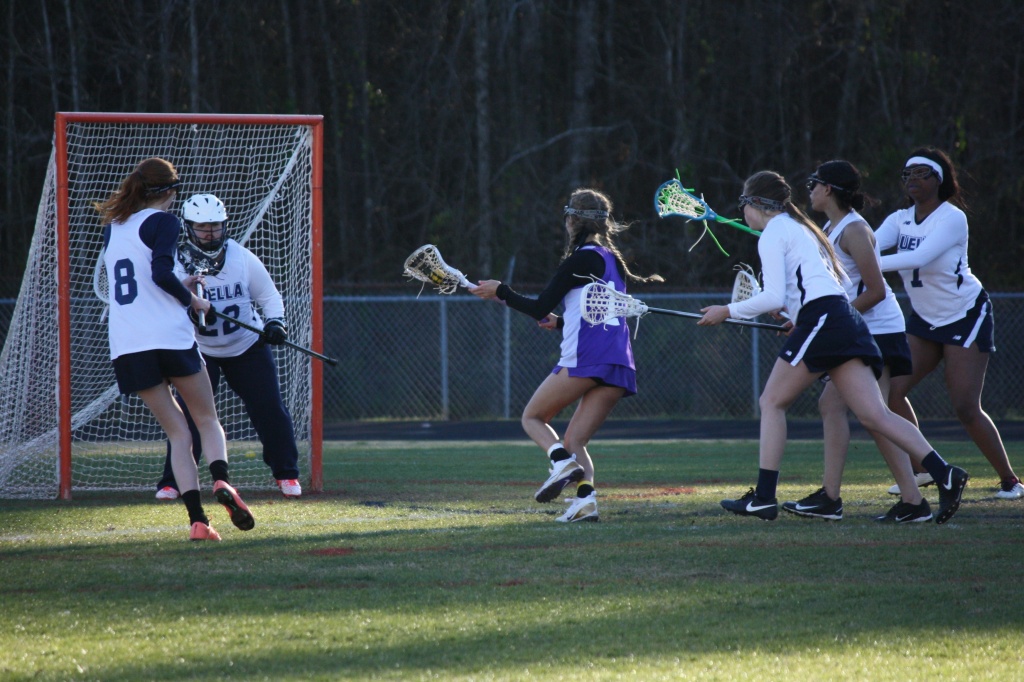 Friday, all four teams were on the road.  The JV girls fell to Northgate 5 to 11. In a non regional game, the varsity girls were defeated by the Lady Vikings 17 to 6.  Adelyn Ryan led  the scoring for the Lady Indians  with 2 goals, followed by Caitlyn Moore and Anna Robbins both with a goal and an assist,  and Katie Morgenroth and Kendall Buttry each scoring a goal.

Meanwhile, at Whitewater, the JV and varsity boys’ teams were taming the Wildcats.  Christopher “Squish”  Easly and Brookins Vaughn lead the way with each scoring 2 goals, along with goalie, Hunter Beckworth’s  8 saves to defeat Whitewater 4 to 2.  Midfielders Jackson Millians and Logan Woodward both had an assist and goalie, Nate Thomas had a save.

The varsity boys rolled over Whitewater in a non regional game. The varsity defense held Whitewater to 5 goals allowing the offense, to drive EC to an 11 to 5 win over the Wildcats. Senior Madison Duffessy was the lead scorer of the the team with 7 goals, an assist, and 3 ground balls. Bailey Brogan assisted with the scoring with 2 goals, 1 assist and a ground ball, along with Christian Barnes and Kalope Wingo , each scoring a goal.  Seniors, Nick Daliet, and David Neary each had 2 assists. Neary, Jackson Elliott, Ryan Mitchell, Chase Swilley, Gareth Ronfeldt, Tanner Schmieder, and Tucker MacDonald each fielded a ground ball.  Goalie, Devin McCarragher had 8 saves and a ground ball.

On Friday night the varsity boys shut out Pebblebrook in a regional home game. This was was the Indians first win in the 6A-7A/Area2, 2018 regional play. Friday night’s scoring was led by Madison Duffessy with 4 goals, Bailey Brogan and Owen DeBole with 3 goals each, Christian Barnes with 2 goals, and David Neary, Thomas McElwaney, Kalope Wingo, Gareth Ronfeldt and Jackson Millians with one goal each. Many EC parents were impressed with the heart, team spirit and comraderie of the Pebblebrook players.

Both the JV and varsity girls teams were on the road Friday night to take on the Whitewater Wildcats. In their first win since 2016, the JV Girls defeated Whitewater 11 to 6. Kenedi Wisenbaker was top scorer with 4 goals followed by Leah Chambers with 3, Sarah Whitehead with 2, and Braylee Marston and Paige Muniz each scoring a goal.

The varsity girls fell to Whitewater in Friday night’s non conference away game. Goalie Katie Owens had 8 saves while Caitlyn Moore scored two goals and Adelyn Ryan, Anna Robbins, and Rebecca Ghyzel each scored a goal.  The final score of the game was Whitewater 9 – East Coweta 5.

In related news, Chris Golterman of Coweta Score did a write up in Sunday’s Newnan Times Herald of this past week’s games.

We have a busy upcoming week for all 4 teams:

“Success at anything will always come down to this: focus and effort; and we control both.” – Dwayne ‘The Rock’ Johnson

ECHS varsity lacrosse teams take on rivals Northgate High School tonight, in the second game of the Coweta Cup. In between the varisty girls’ game and the varisty boys’ games we will be hosting our 2017 Charity Event. East Coweta Lacrosse is honored to support the Batchelor Family and Team Charli.  Please join us begining at 5:30 at the Garland Shoemake Memorial Stadium. 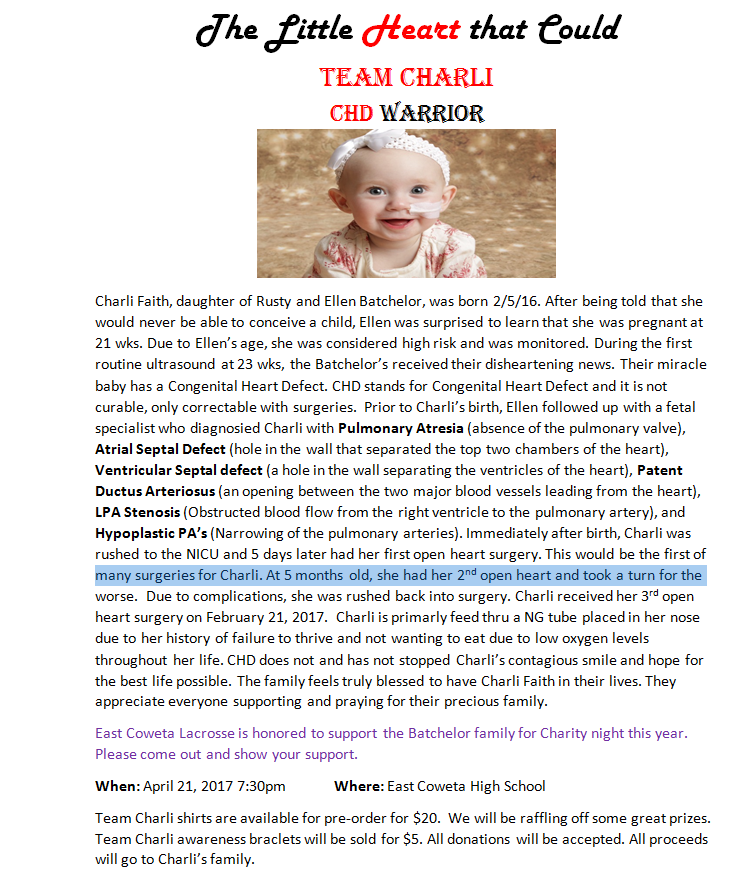 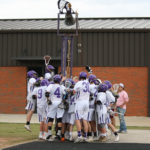 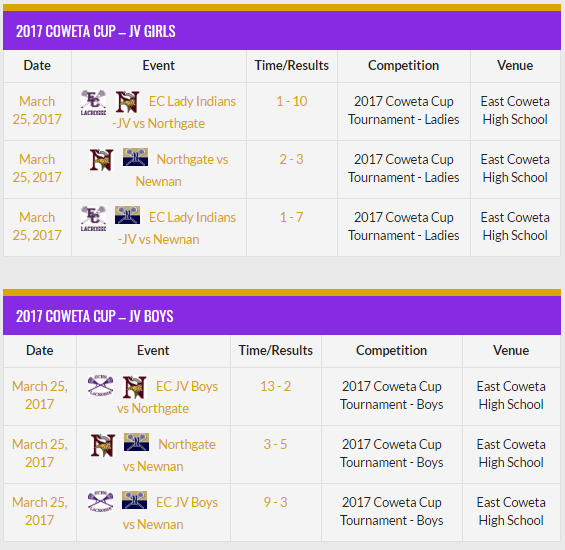